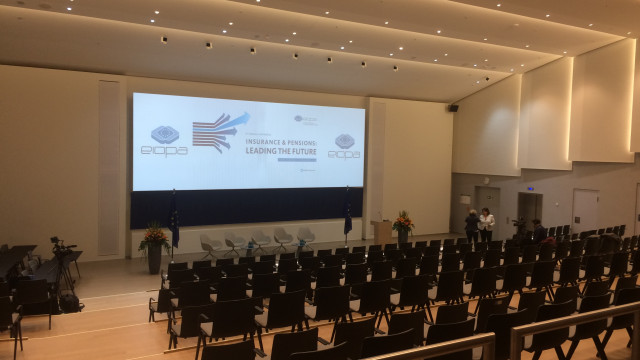 Assoc. Prof. Stanislav Dimitrov attends the annual meeting of EIOPA, the European Insurance and Occupational Pensions Authority. The Frankfurt Forum on 19.11.2019 brought together around 400 representatives of insurers, pension funds, asset management companies, non-governmental organizations, regulators, supervisors and academics. The event was entitled "Insurance and Pensions: Leading the Future." In his opening speech, Gabriel Bernardino, Chairman of EIOPA, emphasized customer protection, climate risks and digitalization in both sectors. Mr. Bernardino was a guest of VUZF in May 2018, when VUZF organized a major international conference in Sofia on the European project for the standardized product PEPP, the pan-European Personal Pension Product. The Frankfurt Forum took place in three main panels. The first session focused on the future of the two industries through the eyes of CEOs. The top executives of Axa, Allianz SE, Swiss Re, Uniqa Insurance Group and McKinsey and Company participated. The second panel discussed the impact of climate risks and adaptation to climate change. The third highlight was the upcoming changes to the Solvency 2 regulatory regime. The event was held at the Frankfurt School of Finance and Management. VUZF was the only university from Bulgaria represented at the meeting.