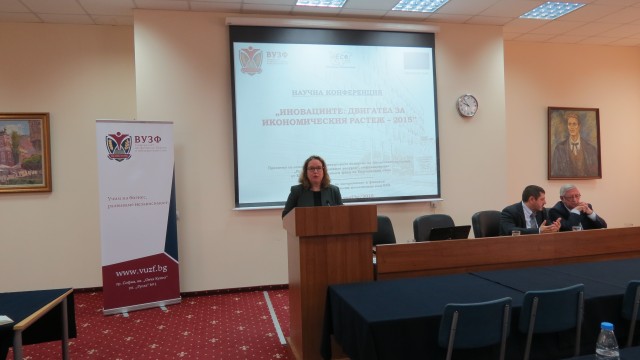 The Higher School of Insurance and Finance (VUZF) was organizator and host of the Third Annual Conference on "Innovation: engine of economic growth - 2015".
The scientific forum this year was dedicated to the results of the project "Improving the quality of education and research in the field of business engineering for building an economy based on knowledge (innovation) and finance". The project, which covers the period from August 2013 to October 2015, was funded by the Operational Programme "Development of Human Resources" and was implemented by VUZF in partnership with the Institute for Economic Research at the Bulgarian Academy of Sciences.

As a result of the project were made two major surveys among the businesses and households in Bulgaria, and there were created conditions for training of young scientists, graduates and doctoral students. Used was the experience of Manchester University (UK) and Steinbeis University (Germany) for the creation of an interdisciplinary program in business engineering. There was participation in the series of international conferences and forums in Athens, Venice, Vienna, Copenhagen, Malta, Thessalonica and Sheffield. There were published over 20 papers in refereed international journals.

Everything for the project you can find here:http://support.vuzf.bg/marketing/Press%20information%20project.doc

"Once again VUZF proved that the future of universities in Bulgaria is associated with the development of research and partnerships with business and science in Europe" - said at the opening Prof. Grigorii Vazov, rector of VUZF. Special guest of the conference was Hon. Iritis Lillian, Israeli ambassador in Bulgaria, who gave a public lecture at the conference on the topic of innovation in Israel – the so called nation-innovator.
The focus of the scientific forum was placed on scientific results in the field of innovation in the financial sector, business innovation and innovation in the analysis of foreign trade. The discussion involved teachers and postgraduates of VUZF, BAS and other academic centers.

In the first panel Assoc. Prof. Vyrzhinya Zhelyazkova introduced the topic "Managing the risk of climate change: new approaches in insurance" and  the report of Assoc. Prof. Irena Misheva was entitled "Innovation in the marketing policy of the insurance company." Both lecturers stressed that in the modern world challenges ahead of the insurers lead to innovations in the policies of the companies.

Among the participants in the second panel were dr. Daniela Ilieva-Koleva and Nikola Diitrov, who presented the topic “Virtual independency”. They did analysis on the critical line between the virtual dependency and the environment requirements, and the abilities of the individuals to reach balance between the two. Assist. Dr. Yulia Dobreva spoke on the issue of sustainable development of Bulgarian enterprises.

The third panel, moderated by Assoc. Prof. Daniela Bobeva, was dedicated to the subject of trade relations between the European Union and regional integration communities in Africa, represented by Prof. Dr. Edward Marinov, and to the results of the study of foreign trade activities of Bulgarian companies, presented by Nedialko Nesterov, PhD student at the Institute for Economic Research at BAS.
Assist Dr. Radostin Vazov and Assoc. Prof. Evgeni Evgeniev who moderated two panels of the conference, made a summary of the main conclusions related to the issues of "Innovation and Science in Bulgaria":
 The government needs to spend at least 1% of GDP for science and innovation, instead of the current only 0.65% of GDP.
 The policy of innovation and science should be better coordinated. Creation of an independent agency for Innovation and Science would be a prerequisite to build better capacity management system.
 Support for young scientists, graduate and PhD students in Bulgaria, is compulsory to have a sustainable research system. This requires the state to devote more resources to stimulate young scientists through a higher rate of monthly allowance; sufficient resources to support research projects and mobility funding for scientific conferences and stay in prestigious research institutes and universities abroad.

History
Already during its first edition in 2013, the conference has emerged as a platform for discussion between business and government in the field of innovative technologies, with specific initiatives aimed at sustainable development of the business. The two previous forums were attended by renowned speakers from Austria, Germany, Denmark, India, Israel, Hungary, USA and others. The participants were introduced to the general framework for sustainable business development in Bulgaria, there were presented established international practices in this sphere, government representatives were discussing the real action, the support and the stimulation for investment in innovation and new industries. More information about the conference can be found at www.ino.vuzf.bg/2015.

Atmosphere of the conference can be found HERE.